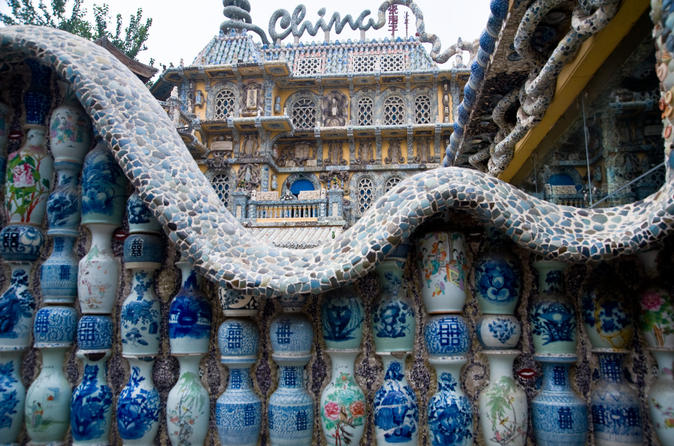 You can choose to depart at any time from 8am to 9:30am – your private guide will collect you from your hotel for the short journey to Beijing South Railway Station. Traveling by bullet train, it takes around half an hour to reach Tianjin – even though it's 85 miles (137 kilometers) from Beijing.

On arrival, you'll transfer to a suitable vehicle: a coach, minivan, or car with private driver, or, for groups of three or less, a taxi. Your first stop is Porcelain House, a 1920s French-style colonial villa covered in thousands of pieces of ancient porcelain. Besides the startling exterior, the 5,000-square-yard (4,200-square-meter) interior is home to a museum of porcelain and antiques, including spectacular marble carvings, crystal, and semi-precious gems from the collection of the owner, Zhang Lianzhi.

Next, discover more of Tianjin's international past with a visit to Five Great Avenues (Wudadao), an area that's home to over 2,000 garden-style villas built by occupying powers during the 1920s and 1930s. You might wish to take a horse-drawn carriage ride around the area (own expense) to capture the architectural splendor at its best.

Your guide will introduce you to Tianjin's cuisine over lunch in a local restaurant: as befits China's fourth largest city, Tianjin food is famous across China.

After lunch, visit a landmark of modern-day Tianjin: the Tianjin Eye. This 394-foot (120-meter) ferris wheel is built over the Yongle Bridge: it's officially the first and only observation wheel to be built above a bridge. Each of the 64 passenger capsules can carry 8 passengers, giving a maximum capacity of 768 passengers per hour, and takes 30 minutes to complete a rotation. Enjoy spectacular views stretching as much as 25 miles (40 kilometers) into the distance from its highest point.

Your last stop will be Tianjin's Ancient Culture Street, the city's number one shopping destination for traditional Chinese goods. Besides the Tianhou Temple and shoe museum, there are almost 100 stores, selling wares from embroidery and calligraphy to tea sets, seals, and figurines, as well as Tianjin specialties.

From here, you'll return to Tianjin Railway Station and board your bullet train back to Beijing. Your guide will transfer you back to your hotel, arriving between 4pm and 5:30pm.

Note: Tianjin ferris is closed every Monday. On this day, you'll visit the Tianjin Food Street or River cruise instead.