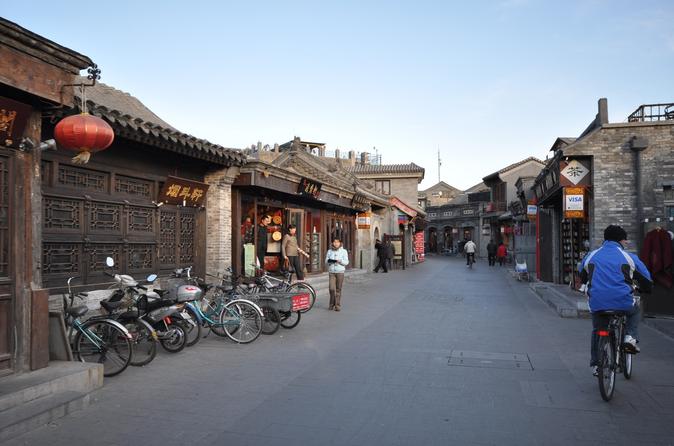 History preserved nearby Beijing’s modern developments and viewed from a bicycle saddle. The Hutongs by bike offer an up and close insight in the history of the capital’s historical buildings through alleys, where a leisurely pace lifestyle rules.

Very little of the original Beijing, dating back from the Jin Dynasty remains visible as of today. Officially translated as the Northern Capital, Beijing’s origins date back as far as the 11th century and were the capital city during the Jin and Yuan Dynasty up until the late 13th century. The former glory of what stands still today are remnants of later dynasties (Ming and Qing) but these periods have shaped the historical importance of the development of Chinese culture to the more modern influences of a fast-moving city. A small, preserved part of the capital that offers an insight of a bygone era with some modern flairs are the Hutongs, a labyrinth of narrow streets depicting of flairs of Chinese heritage. And what better way to explore this than by bicycle.

Your guide and driver will be ready at your centrally located hotel in Beijing for a ride through downtown Beijing, where cars, motorcycles and bikes move in all direction of this metropolis. We arrive at the starting point of the Beijing Hutong. A connection of narrow network of lanes created by closely built quadrangular homes not only show reminders of the construction skills of the Chinese during the Yuan, Ming, and Qing dynasties but still provide living quarters, quaint cafes and galleries for those appreciating the older times. Your cycling trip will bring you passing traditional courtyard houses, hidden behind high walls as you paddle along tree-lined alleyways that are the true heartbeat of this unique city and a real-life link to its fascinating past. Many of the houses and buildings have ornate carved characters intended to bring good fortune to the house owner and his trade. The size and style of gate denoted the owner’s wealth and social rank. Your guide will be able to explain the details and the various unique sights passing by such as a little-known temple, parks where locals spending quality time chatting and mingle and a visit to one of the old courtyard houses gives you a sneak peek inside these stone walls and ancient aristocratic architecture.

In the end, we have to leave the unusual mix of and current-day locals, giving the hutong alleys their unique character behind as we end our cycling tour near the Forbidden City. Transfer to your hotel is included in the tour and depending on the location of your downtown hotel and the always presence traffic that may cause some slight delays before arriving at your hotel.

History preserved nearby Beijing’s modern developments and viewed from a bicycle saddle. The Hutongs by bike offer an up and close insight in the history of the capital’s historical buildings through alleys, where a leisurely pace lifestyle rules.