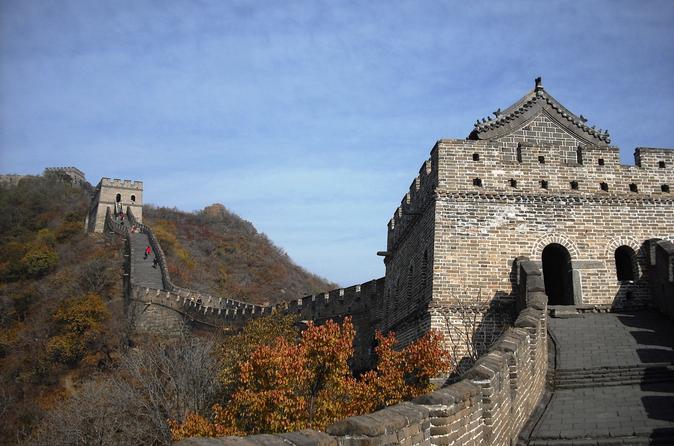 One of humans’ greatest feats in construction history must be the Great Wall of China. Meandering through the often rugged landscape of central China, one simply cannot describe the sensation when taking position at one of the Mutianyu watch towers.

As one of the ‘Wonders of the World’, the Great Wall is a must on any visit to Beijing. Stand atop one of the ancient watchtowers and cast your eye towards the horizon, taking in the vast scale and sheer beauty of the Wall as it snakes its way across the tops of impossibly steep mountain ridges.  Originally a series of smaller walls built to repel northern invaders, it was not until the unification of the empire under Qin Shi Huang Di in 221 BC that the various sections of the Wall were linked up. It is said that more than 300,000 men worked for ten years to complete it. These thousands of kilometers’ long masterpiece of construction ingenuity remains a remarkable feat, even when you re-visit the Great Wall over and over again.

The Great Wall at Mutianyu is located around 75 kilometres / 45 miles outside of the heart of Beijing in the Huairou County. This section of the wall is slightly less crowded than its highly popular brother at Badaling and has a more rugged feeling compared to other parts. We’re scheduled to leave Beijing at around 08:30 hrs for a drive through the countryside as we head out to the starting point of ascending the Great Wall of China ourselves. We start our approach by taking a cable car from nearby the parking lot, up to the main access point as your guide will explain in detail all there is to know.

Mutianyu Great Wall enjoys a long history and is an integral part of the rich culture of China. It connects Juyongguan Pass in the west and Gubeikou Great Wall in the east. This section of the wall began during the Northern Qi Dynasty (550 - 557) then built and rebuilt up until the 17th century. It was built wide enough to allow a brace of five horses to gallop between the battlements and was thus used to convey soldiers, arms, and food with great speed to various parts of the northern frontier. Due to its location among fertile plains, over 90% of the surrounding areas on both sides of the wall are covered with greens – more than any other part of the wall which gives it another added value compare to other parts, for example Badaling and Jinshanling. Also learned about its history and importance for the Chinese military.

After having explored the Great Wall from left to right, and before we head back to Beijing, enjoy a lunch at a local restaurant. A selection of Chinese dishes, suitable for the western palette, will be freshly prepared.  En route to your hotel, we will make a quick stop at the 2008 Olympic ground; the unique Bird’s Nest and Water Cube remain some of the most striking designs after Beijing hosted the Olympic Games.

We expect to be back to the city at around 15:30 hrs, depending on traffic.

One of humans’ greatest feats in construction history must be the Great Wall of China. Meandering through the often rugged landscape of central China, one simply cannot describe the sensation when taking position at one of the Mutianyu watch towers.